Despite facing every obstacle in its path, the 2020 MLS season will see a champion raise the MLS Cup on Dec. 12.

One of 18 teams will have that distinct honour in this unique 2020 campaign, including fierce rivals Toronto FC and the Montreal Impact, who might square off against each other on the road to the MLS Cup Final. Here’s hoping that it produces the same level of entertainment from the 2016 Eastern Conference final.

As the post-season gets set for kickoff on Friday, here’s everything you need to know about the 2020 MLS Cup Playoffs.

How does it work this year?

Due to the COVID-19 pandemic, MLS altered the playoff format for 2020. Instead of 14 teams (seven from each conference) qualifying for the post-season, 18 sides were awarded spots this year.

However, the Eastern Conference has 14 teams compared to 12 in the Western Conference. As a result, the East was handed 10 spots and the West was given eight. All matches are single elimination games, with the higher seed hosting the matches.

The Western Conference format is straightforward. The first round sees the No. 1 and No. 8 seeds – Sporting Kansas City and the San Jose Earthquakes, respectively – face each other. The No. 2 and No. 7 teams square off in another matchup, and so on. The bracket is pre-determined, meaning there is no re-seeding after the opening phase.

In the East, there are two play-in games between the No. 7 and No. 10 seeds, plus the No. 8 and No. 9 sides. The Montreal Impact, who finished ninth during the regular season, face the New England Revolution at Gillette Stadium to determine who’ll qualify for the first-round proper.

From there, the lower seeded play-in winner faces the Supporters’ Shield-winning Philadelphia Union and the higher-seeded side has to face Toronto FC in East Hartford.

What happens if a team experiences a COVID-19 outbreak?

Because this is 2020 and we’re in a pandemic, this is a question that has to be asked.

It’s especially topical for MLS, who dealt with multiple COVID-19 outbreaks throughout the year. This is why they had to determine their final standings based on points per game, as eight sides did not play the allotted 23 games during the regular season.

Due to this month’s international break when marquee players tested positive for the novel coronavirus, some teams are feeling the effects before the playoffs have even begun.

The Uruguayan national team experienced an outbreak, which is especially devastating for LAFC, who saw Golden Boot winner and MVP finalist Diego Rossi test positive. That rules out Rossi for the first-round matchup against the Seattle Sounders. Forward Brian Rodriguez, defender Diego Palacios and midfielder Jose Cifuentes are also ruled out for the opening phase.

Elsewhere, Sounders defender Xavier Arreaga and Orlando City’s Jhegson Mendez will miss their first-round games due to their close contact with positive cases on the Ecuadorian national team, according to The Athletic.

Even though LAFC will be without four players, they can still name enough players to the 18-man matchday squad. If, however, any side is dealing with the virus, MLS can reschedule the games. But if they aren’t able to, then the team experiencing the outbreak forfeits the match, per ESPN’s Jeff Carlisle.

Who are the favourites?

To no one’s surprise, the Philadelphia Union is a 24 per cent favourite to win MLS Cup, according to FiveThirtyEight.

The most favoured sides from the West are Sporting Kansas City and the defending champions, the Seattle Sounders. Each has 13 per cent odds of lifting the trophy.

Toronto FC, runners-up in 2019 to Seattle, are fourth favourites at 11 per cent.

The Union clearly has a strong case to win the title. They won six of their final eight games entering the playoffs. Defensively, Philadelphia registered an Eastern Conference-low 1.16 expected goals against (xGA) per 90 minutes this season. A stingy defence tends to help in knockout formats, so the Supporters’ Shield winners are rightly one of the favourites.

The Sounders may have an argument, though, being the reigning MLS Cup winners. No other side posted a higher xG (41.8) than the Sounders this season, nor did anybody have a lower xGA (20.2) than Seattle. Losing Xavier Arreaga for the first round is a blow to the defence, though.

Sporting KC is an unknown given their injury issues. Midfielder Felipe Gutierrez was ruled out for the season in June, while pivotal right-back Graham Zusi underwent foot surgery in October. Energetic midfielder Gadi Kinda and striker Alan Pulido are both questionable, but if they are available, that’ll significantly boost their title aspirations.

Toronto is an interesting case study. The last 12 games have led to a decrease in attacking production, which is a huge concern for the Reds entering the playoffs. 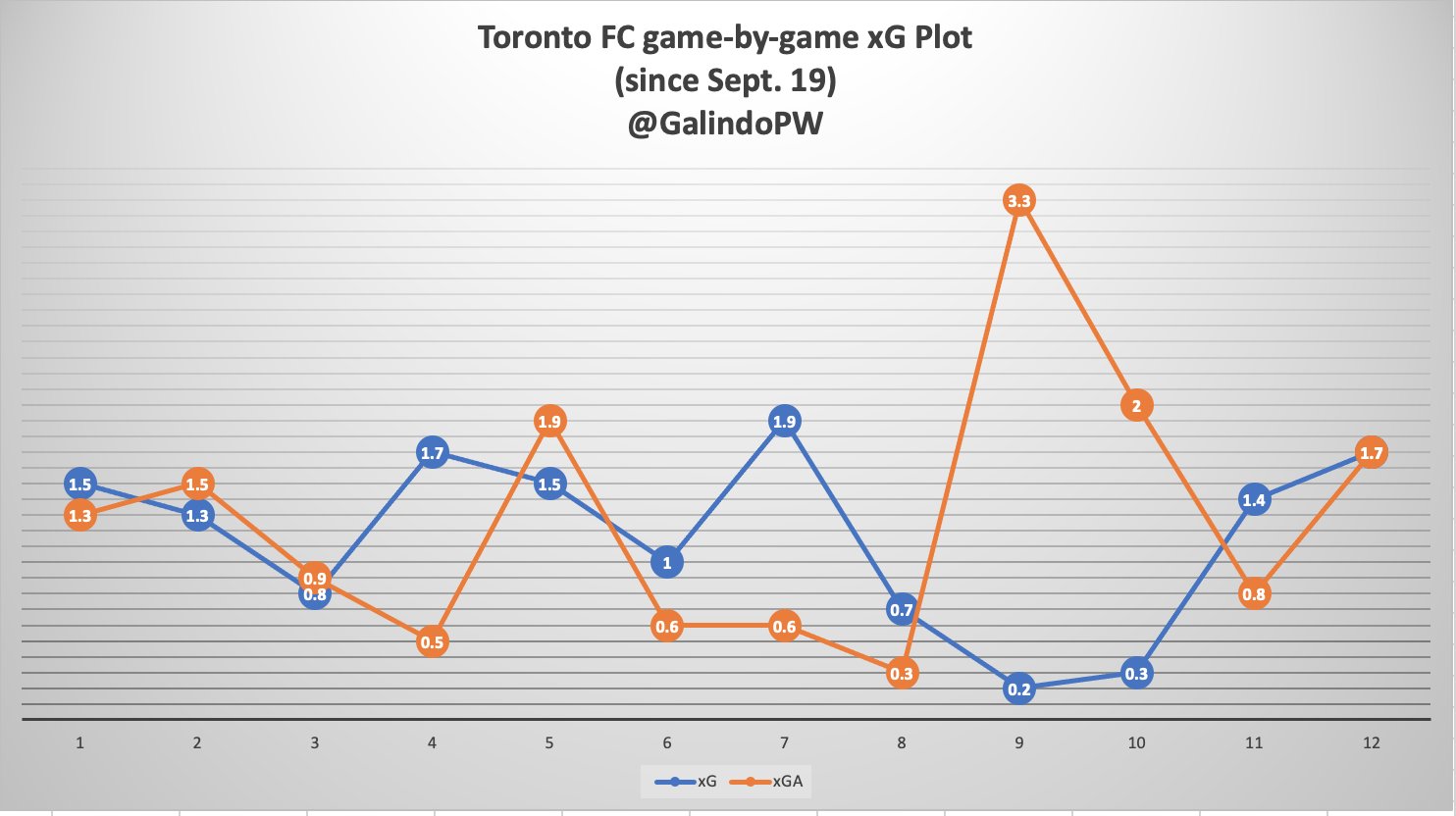 Toronto FC’s game-by-game xG plot in their final 12 games of the regular season. (via FBRef.com)

That coincided with the club’s move to East Hartford and the injuries piling up. On the flip side, Ayo Akinola filled in admirably for the previously injured Jozy Altidore. But with Altidore returning and both Marky Delgado and Pablo Piatti reaching full fitness, perhaps TFC’s attacking fortunes will change.

One key for each play-in round game

Nashville SC vs. Inter Miami: The midfield. Nashville’s midfield is incredibly disciplined off the ball with Anibal Godoy and Dax McCarty as anchors. The creativity of Randall Leal and Hany Mukhtar adds an obvious threat as well. This is where Blaise Matuidi’s aptness at covering ground and transitioning the ball forward comes in handy. Combine that with Rodolfo Pizarro’s ability to manipulate space and create, it should be a fun battle in the middle.

New England Revolution vs. Montreal Impact: Counter-attacks. Because the Impact push their full-backs so high up the pitch, there’s tons of space out wide to exploit in transition. Montreal’s centre-backs aren’t blessed with pace, either, so they need help from the midfield to cover ground, otherwise it’ll be a repeat of the previous two matchups where New England ran rampant.

Fri Nov 20 , 2020
BELLEAIR, Fla. — Women’s British Open winner Sophia Popov left top-ranked playing partner Jin Young Ko and everyone else behind Thursday in the Pelican Women’s Championship. Popov shot a 6-under 64 in windy conditions to take a two-stroke lead over Ashleigh Buhai, with Ko eight shots behind after a 72 […]